Switzerland may be better known for its watches than its wines – possibly because the fruit of the vine here is so good, most never leaves the country. Not only do the Swiss know how to make wine, they know how to throw a party. And what a party this one was!

From July 18 until August 11, the charming Swiss Riviera town of Vevey, (population 20,000) welcomed some 400,000 visitors to Fêtes des Vignerons. A passionate tribute to winemakers and their wine, this extraordinary celebration happens only once in every 20 years.

What started as an annual street parade in 1797 to honour the winemakers of the Lavaux region has morphed into a three-week extravaganza featuring song, dance, theatre, and, of course, wine. Organized by the Confrérie des Vignerons, (the Brotherhood of Winegrowers) it is an event so remarkable in the world that in 2016 UNESCO granted it Intangible Cultural Heritage status.

The show’s artistic director was none other Daniele Finzi Pasca, a Swiss native who earned international celebrity status directing spectacles such as Cirque du Soleil’s show Corte and the closing ceremonies at Turin and Sochi Winter Olympic Games. He and his creative team began planning for the event ten years ago. Participants had been rehearsing for the past year.

A colossal, open-air temporary arena to accommodate 20,000 visitors at each of 20 performances was built in Vevey’s market square. The story of the vineyard worker and the vines throughout a growing season, as viewed by a child and her grandfather, was performed by more than 1,200 singers and musicians and a cast of over 5,000 costumed actors, volunteer residents of Vevey and the surrounding area.

The town of Vevey, located on the sunny shores of Lac Leman (aka Lake Geneva), in the French speaking, western part of the country is set against the natural backdrop of the Alps and surrounded by the UNESCO World Heritage vineyards of the Lavaux. region.

Beyond the main performance, morning to late-night parties spilled over into streets along the lakeside. Talk about a full-scale gala of culture, entertainment, fine dining and unique wines. It was all there in Vevey.

The Confrérie des Vignerons produced special wines for the occasion. Local chasselas grapes were used for the white and a blend of Pinot, Gamay, Gamaret and Garanoir for the red. Producers anticipated selling 500,000 bottles during the event.

Each day a different Swiss canton had an opportunity to showcase its own culture, wines and food.    Bern and Vallais were the regions featured on the days that I visited.

The popularity of this year’s extravaganza bodes well for the next Fêtes des Vignerons — twenty years from now. Wine lovers may be marking their calendars, but why not get to know Swiss wines now? Travelling in Switzerland is a delight and family-owned wineries welcome visitors.

You don’t even have to leave home to enjoy Jean-René Germanier ‘s wines that are internationally recognized as flagships of the Valais region and available from Buyers and Cellars. Be among the first Canadians to enjoy them!

Travel to Switzerland:
Swiss and Air Canada have direct flights from Canada to Zurich and Geneva. The one-hour train trip from Geneva to Vevey is a scenic ride through the lush Lavaux vineyards.

Where to stay:
Vevey’s historic Grand Hôtel du Lac in the heart of the town has a Michelin-starred restauran 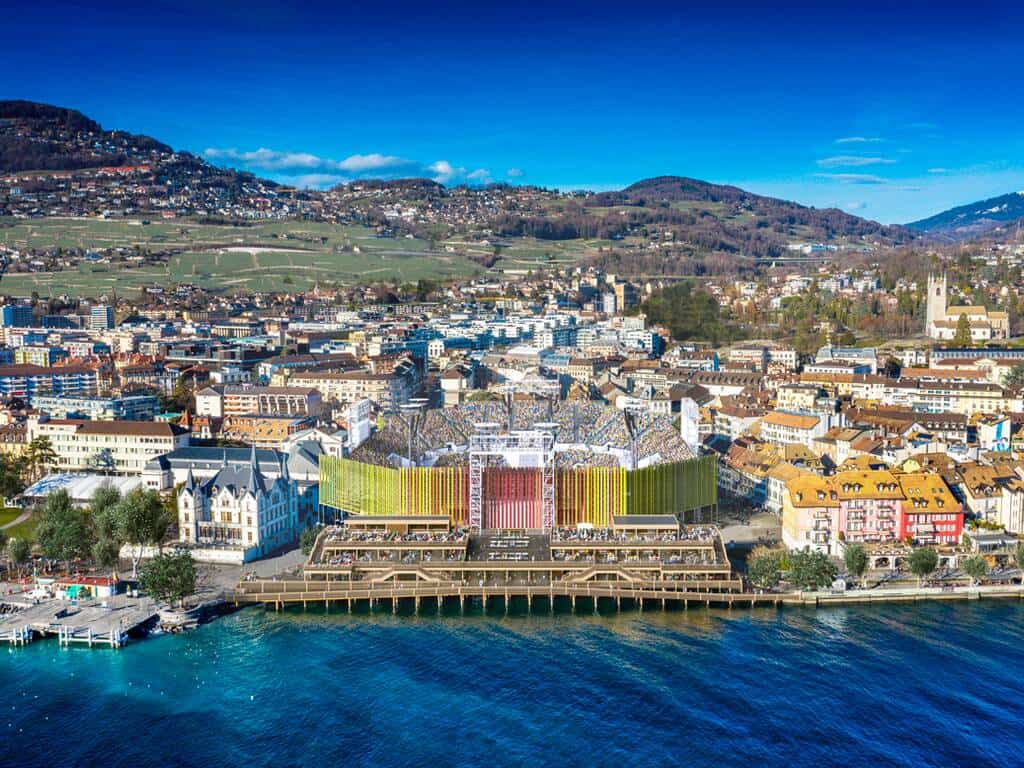