The region of Trentino-Alto Adige is bordered by East and North Tyrol (Austria) to the north-east and north respectively, by Graubünden (Switzerland) to the north-west and by the Italian regions of Lombardy to the west and Veneto to the south and south-east. It covers 13,607 square kilometres and is extremely mountainous, covering a large part of the Dolomites and the southern Alps. Südtirol (where Cantina Kurtatsch is located) has an area of 7,398 square kilometres, all of it mountainous land and covered by vast forests. The climate here is Mediterranean (hot summer and cold winters) owing to the influence of the many mountain ranges, which stand at over 3,000 metres above sea level, and the wide valleys through which flows (from north to south) the main river, the Adige, and its numerous tributaries. 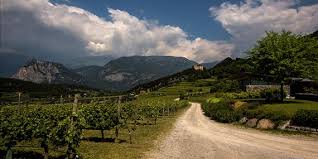