The northern Italian wine regions of Trentino and Alto Adige are often lumped together and discussed as one.  However, they are quite distinct and deserve to be considered in their own right.  Let’s first explore Italy’s most northerly wine region, Alto Adige, which is also known by its German name, Südtirol.

This sparsely populated region is surrounded on three sides by beautiful and imposing mountains: the Austrian Alps and the Italian Dolomites.  The valley created by these mountains has been a historically well-travelled corridor between the Italian peninsula and the great continental expanse to the north.  Though wine culture existed well prior to their arrival, the Romans established this as a significant wine growing region during their travels through the valley.  The region was under Austro-Hungarian rule until the conclusion of World War 1 when the Italians annexed the area and finalized their nation as we know it today.  Because of this history, the region is a blend of cultures, with influence from Germany, Austria, Switzerland and of course, Italy.  In fact, the region’s populace largely speak German, reflected in their bi-lingual wine labels.

Alto Adige is one of the few Italian wine regions where production is actually increasing.  Following the 1970s, the focus here turned increasingly to quality rather than quantity.  For a region dominated by cooperatives (more on that later), this would seem counterintuitive.  But it makes perfect sense when you consider that this is one of the most labour intensive and precariously farmed wine areas in the world.  Mechanical harvesting and other favourable economies of scale are simply not an option here.  The low-lying flatlands were, and still are, planted almost entirely with apples; this is one of Europe’s most important areas for apple production. The only available land for grapes remained the incredibly steep and largely elevated slopes that dotted the valley.  That realization, combined with the region’s tiny vineyard holdings, meant that work had to be done entirely by hand.  Competing with other regions that didn’t face these challenges in the bulk wine market did not make sense.  And so, Alto Adige’s producers re-focused their efforts on growing high-quality grapes and marketing premium wines within Italy and abroad.  Today, the region has Italy’s highest percentage of DOC production though it makes a mere 1% of its wine.

Co-operatives dominate production, representing more than 70% of total output.  To most oenophiles, the word ‘co-op’ does not engender thoughts of quality and distinction.  But Alto Adige’s co-operatives are unquestionably different.  The grower families have been farming their small plots for centuries and their dedication and passion rivals any.  The region has approximately 5,300 hectares of land under vine owned by 5,000 farmers.  The individual holdings are often a hectare or less, resulting in an obsessive attention to detail and extraordinary vineyard knowledge.  The younger generation of growers have eschewed pergola-trained vines over the past few decades in favour of the more respected guyot system.  The lower yields produced result in wines with more intensity and character while maintaining the region’s trademark lively acidity and savoury minerality.

The wines of Alto Adige are some of the finest and most underappreciated in the world, possessing many markers of quality: precision, tension, energy and structure.  These are mountain wines of the ‘highest’ order with freshness and minerality amid ripe, concentrated fruit and savoury complexity.  Like all great wines, balance is front and centre.  That balance is largely created by the area’s unique terroir: intense sunshine, extreme elevation, hot days (some of Italy’s warmest summer temperatures) with cool nights and drying mountain breezes flowing south through ubiquitous valleys.  Of course, viticulture and vinification play an important role, but the region’s wines are primarily crafted through the array of sharp, drastic alpine landscapes that produce some of the most striking scenery in all the wine world.

The region’s soils vary greatly, often within a few hundred yards: volcanic; quartz slate and mica; limestone.  In addition, there are countless sub-valleys, creating an array of micro-climates, and the building blocks for the proliferation of many different grape varieties.  The region is known primarily for making some of Italy’s finest white wines, chief among them, Pinot Grigio and Pinot Bianco (Pinot Blanc).  These Pinots are neither bland nor placid.  Elevation, steep exposures and low yields come together to make wines with an elegant and salty personality.  The Grigios possess concentrated flavours and weight.  They have abundant floral notes and a juicy fruitiness.  Above all, they are incredibly food-friendly and will hold up to much more than you’ve come to expect from the grape.  Alto Adige’s Pinot Biancos are amongst the best examples in the world.  These wines are floral, mineral and incredibly refined.  Weight, but not weighty.  Though many clock in at over 14% alcohol, Alto Adige’s examples are balanced by sleek tangy acids, a trait often lacking in Pinot Blanc from other parts of the world.  Once again, a food pairing pleasure.  Other grapes of import include Chardonnay, Sauvignon Blanc and Gewürztraminer.  The latter rival the finest of Alsace.  The drier Alto Adige style offers a friendlier food partner without sacrificing the power and intense character Gewürz fans adore.

Though less known for red wines, Alto Adige grows and vinifies two highly unique and fascinating indigenous grapes.  The most widely grown red variety is Schiava, also known by its German name, Vernatsch.  There are a handful of Schiava clones grown in the region and most producers blend a combination of them.  Schiava makes pale, lighter-bodied wines with rich, ripe red fruit character and fine grained, supple tannins.  These are incredibly charming wines that delight on the lunch or dinner table.  Unfortunately, this lighter style of wine has fallen out of fashion and plantings have declined over the past couple of decades.  The masses’ loss is your gain!  These wines, usually from old vines, offer tremendous value and a welcome diversion from the usual suspects.  The second of Alto Adige’s wonderfully distinctive red grapes is Lagrein, which makes deeply coloured, earthy and tannic wines.  Lagrein offers tremendous depth and a rustic profile that Tuscan and Piedmont drinkers might appreciate.  Modern examples offer a more polished, rounder profile via shorter macerations and prolonged oak aging.  Regardless of the style, these wines age gracefully and pair wonderfully with hearty Italian fare.  Other red grapes you will find in the region include Pinot Nero (Pinot Noir), Cabernet Sauvignon and Merlot.

Alto Adige’s contiguous neighbour to the south is the region of Trentino.  It’s much more Italian than its northern counterpart in language, culture and history.  Unlike Alto Adige, production here is declining, as it is with many Italian regions.  70% of its vineyards are used in the production of DOC wines, second in Italy behind Alto Adige.

The climate here is generally warmer than Alto Adige, ranging from Mediterranean to Continental to Alpine depending on specific location and, more importantly, elevation.  Here, we see the mountains slowly recede as you head south into the lower lying areas surrounding the northern reaches of Lake Garda.  The cooling southern breezes that flow down the valley keep the grapes dry and healthy, an important factor in a region with fairly significant rainfall.  The range of terroirs here also means a fairly wide array of grapes grown and vinified.

Chardonnay represents 50% of Trentino’s plantings.  And while the region makes reasonably good still wines from Chardonnay, it’s the traditional method sparklers that really stand out and command attention.  Trentodoc, along with Lombardy’s Franciacorta, are Italy’s answer to Champagne.  Parts of Trentino, particularly the higher elevated sites with temperate climates and chalky soils, greatly resemble the terroir of that famed French region.  While these are clearly world-class sparklers already, they’re only going to improve going forward.  Historically speaking, this is a fairly young category for Trentino.  In time, growers and winemakers will invariably deepen their understanding of both Chardonnay and the exacting production process involved.  With respect to Trentino’s native white grape varieties, Nosiola stands above all others in terms of significance.  When fermented dry, Nosiola makes light and highly aromatic wines with a textbook hazelnut complexity and zippy acids.  The grape really shines when it’s harvested late and dried over the winter months, developing varying levels of Noble Rot to make the renowned Trentino Vin Santo.  The grape’s thin skins make this type of production a natural, as botrytis easily invades and begins its magic.  Unfortunately, these thin skins also make it an incredibly difficult grape to grow.  As such, plantings of Nosiola continue to decline and finding a bottle outside of the region is increasingly difficult.  As you would expect, there are also large plantings of Pinot Grigio that here make richer, rounder, more complex wines than examples from the neighbouring Veneto.  Also of note are Pinot Gris, Müller-Thurgau and, to a lesser extent, Pinot Blanc.

The region’s most important indigenous red grapes are Teroldego and the late ripening Marzemino.  The former is genetically related to Syrah, exhibiting similar spicy, peppery notes along with dark colour and plenty of acid.  Marzemino is also planted in the surrounding regions of Veneto, Lombardy and Emilia-Romagna.  And following a recent trend with Italian varietals, you will find small plantings of the grape in Australia, and to a lesser degree, New Zealand.  Of additional note are the growing number of Merlot and Cabernet Sauvignon plantings.  The area’s warm air trapped within its valley combined with climate change make growing and vinifying these grapes more sustainable and successful than ever.  As in Alto Adige, the various clones of Schiava are well planted and vinified into both red and lovely, textural rosé wines.

The wines of both Alto Adige and Trentino are well worth your time and money.  They offer a myriad of unique grapes as well as fantastic examples of the more familiar.  They are incredible food partners that beg to be enjoyed at the dining table.  And because of their relative obscurity, they offer tremendous value, especially when you consider the formidable farming and production expense.  They are rich with interest, flavour and tradition.  Salute! (Prost!) 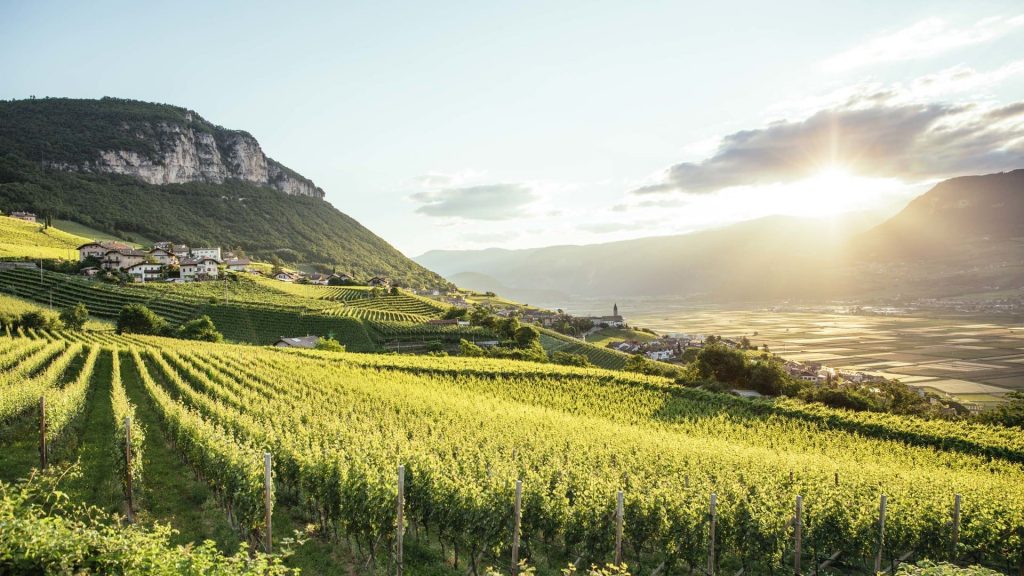