Roussillon – Carving Out An Identity

All too often, what first comes to mind when wine consumers hear the name Roussillon is Languedoc. Usually lumped together, the southern French regions are quite distinct, each with their own identity, culture and (most importantly here) wine history and style. In fact, Roussillon has much more in common with Spain’s Catalan region next door than it does the rest of France. A significant proportion of the population consider themselves Catalan, and you’re as likely to see that bright red and yellow flag as you are France’s tricolour. The region has a long and rich wine history that dates to the 7th Century BC when vines were first introduced by the Greeks, with further development by the Romans centuries later. For most of the 20th century, Roussillon winemakers focused almost exclusively on Vins Doux Naturels (VDN), the seriously sweet wines that gained the region some degree of notoriety around the world. Unfortunately, this style became less and less fashionable as time wore on and much of the market for these sweet wines dried up. Prior to that, table wines took a firm backseat, often used solely for blending into the lighter wines from Languedoc.

The region’s production is dominated by cooperatives. However, the last couple of decades have seen a new generation of winemaker emerge. While these dynamic producers remain committed to producing VDN, their primary focus is on making distinctive, terroir-driven dry white, rosé and red wines. They don’t use excessive oak, nor are their wines over-extracted. Rather than making ‘international’ styles for the press, their focus is on the wines they want to drink, and want others to drink with them. Their passion, energy and quality-obsessed mindset are forging a new way forward for the region.

Located in France’s southwest corner, Roussillon is essentially a giant amphitheatre, with mountains on three sides cascading down to 60 km of picturesque Mediterranean coastline as it turns south toward Spain. Relatively speaking, it is a fairly small region with only 20,000 hectares under vine, six times less than what is planted in Languedoc. It is responsible for a mere 2% of France’s total wine production and 70% of its wines are classified as AOP, dispersed among 14 designated appellations. Whereas the majority of Languedoc vines are planted on low-lying, fertile plains, Roussillon’s are generally found on steep, rocky, elevated terrain, up to 650 meters above sea-level. For the most part, only vines and olives will grow in this harsh environment.

With 325 days of sun per year, Roussillon is France’s sunniest wine region. It is also one of its warmest and driest. Grapes here ripen with ease and even entry-level wines achieve alcohol levels above 13%. Maintaining freshness and elegance in the wines can be a challenge and the best examples come from elevated sites and older vines, where cooler nights and established root structures help mitigate these issues. Like all regions, soils vary. But there is a preponderance of extremely poor, slate and schist-based soils similar to those found in Spain’s Priorat region. And much like Priorat wines, the best from Roussillon possess a streak of salty minerality beneath the ample fruit that helps balance lower acidity and higher alcohol levels. Strict canopy management and work in the vineyard are critical here, as all that sunshine and heat can result in overly jammy, soupy wines if great care is not taken.

Grapes for dry wines here are similar to what you’ll find throughout much of southern France and Northern Spain: Grenache, Syrah, Mourvèdre, Carignan and Lladoner Pelut (a cousin of Grenache) for reds; Grenaches Blanc and Gris, Macabeu, Roussanne, Marsanne and Vermentino for whites. There are some vignerons growing international varieties like Chardonnay and Merlot to varying degrees of success. But they often lack the structure needed to balance out the fruit intensity and full body that the region’s climate produces. Grenache is the most widely planted grape in the region, with Syrah becoming increasingly favoured for its rich fruit and spice profile, deep colour and structure.

Roussillon’s large percentage of old vines, harsh climate and poor soils combine to create the lowest yields in France, averaging less than 30 hectolitres/hectare. That’s an astonishingly low number that results in massively concentrated, robust wines that are loaded with regional character. Those low yields also mean that making wine here is a costly enterprise. This is further compounded by the area’s steep, rocky terrain that make mechanical farming all but impossible. Roussillon has the highest percentage of organic/bio-dynamic vineyards in all of France. The region’s extreme, dry climate and severe, constant wind (known locally as the Tramontane) keep the grape bunches dry throughout the growing season, a critical factor for organic viticulture. 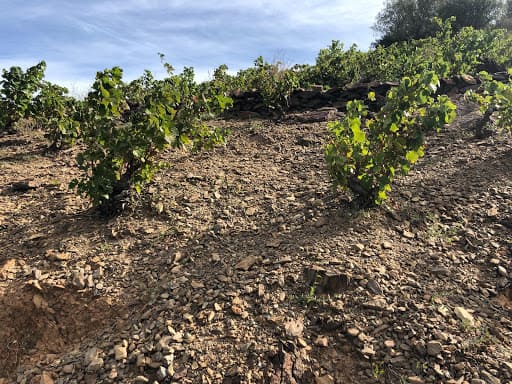 Despite its shrinking global appeal, Vins Doux Naturels remain a significant part of Roussillon’s wine identity, producing 80% of the category. They continue to offer some of the greatest value in wine and are widely counted among the finest sweet wines in the world, offering up loads of concentration, complexity and intrigue. Like Port, VDN are fortified wines made by adding a neutral grape spirit to arrest fermentation, leaving plenty of residual sugar in the finished wine. They are made from a variety of local grapes, notably Muscat and all three Grenache varieties. Banyuls, Maury and Rivesaltes are the most famous VDN in the region named after the villages in which they are produced. The finest examples are aged for decades in barrel, picking up exotic, oxidative aromas and flavours. Some are even racked into clear glass jugs and aged outside in the hot Roussillon sun where they pick up a funky (in a good way), wild character unlike anything most have ever tasted. This wine style, known as Rancio, is typically blended with barrel-aged VDN prior to more time in the cellar and eventual release into the market.

Circling back to where we began, it has become apparent to most in Roussillon that they must differentiate themselves from their eastern neighbours. While Languedoc is often a great source of inexpensive, easy-drinking and easily understood wines, Roussillon wines tend to be more demanding of the consumer. Roussillon’s naturally low yields and expensive vineyard management make it difficult to compete with Languedoc on price alone. But it can compete on quality and relative value compared to other wines not only in France, but throughout the world. It is a region that remains under the radar, due in large part to historically muddled marketing. But all of that is slowly changing, with a more focused and collaborative effort aimed at exporting quality wines to new and emerging markets. Roussillon has everything a region needs to make exceptional, world-class wines: plenty of old vines; a warm, windy climate that ripens grapes and keeps vines healthy; an array of poor, rocky soils and elevated topographies; a developing wine-tourism industry fueled by an accessible location and picture-perfect scenery; and, most important of all, an energetic, determined and passionate group of winemakers anxious to show the world what Roussillon terroir has to offer.

Upon travelling to Roussillon in 2019, we identified and met with a handful of the ‘new guard’ vignerons. Each of them made exceptional wines, all with the distinctive regional terroir that defines our portfolio. But there was one producer that caught our attention above all others. Their family had a rich, long history in the region. Their wines were both delicious and interesting. They offered tremendous value and fully showcased Roussillon’s uniqueness. They were also the type of down-to-earth, passionate wine professionals that we like to partner with…

As long-standing members of the local cooperative, the Sire family have been grape growers in Roussillon since 1906. But it wasn’t until 1989 that they decided to vinify and bottle their prized fruit under the name Domaine des Schistes. Their 50 hectares of vines are planted in predominantly schistous soils around the villages of Estagel and Tautavel. This soil-type is found in pockets throughout the region and provides the ideally poor, rocky foundation for quality viticulture in this corner of France. The winery is now under the stewardship of young Mickaël Sire, firmly part of the aforementioned group of ‘next generation’ Roussillon winemakers. Like many young winemakers, Mickaël travelled extensively abroad before returning home to take over his family’s estate. He farms organically and adheres to the principles of low-intervention winemaking: native yeast ferments with minimal oak and no fining or filtering. His wines are loaded with Roussillon character. They are unmistakably gastronomic, suited to the lunch or dinner table. And they are among the finest wines the region has to offer. Buyers+Cellars is extremely proud to represent Mickaël and his family’s wines for the very first time here in Canada.